The seventh session of the Board of the Inter&nbs ... 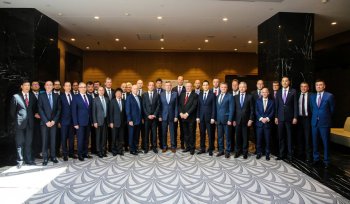 The seventh session of the Board of Directors of the International Association of Oil Transporters took place in Minsk (Republic of Belarus) on May 22-23, 2017. Apart the members of the IAOT: „MERO CR“, Inc. (Incorporated Company), „AK „Transneft“, Inc., „Transpetrol“,Inc., „MOL“, Inc., JSC „Gomeltransneft Druzhba“, „KazTransOil“ JSC, Chinese National Corporation of Oil and Gas (CNPC Pipeline Company), Caspian pipeline consortium have also participated the CEOs of JSC “Ukrtransnafta“ and „PERN A.S.“ from Poland. The Board of Directors on the seventh session approved the admission to the IAOT JSC “Ukrtransnafta“.

The participants of the session under the chairmanship of the Director JSC „Gomeltransneft Druzhba“, Mr. Oleg Pochinok discussed the results of activities of the three Permanent Working Expert Groups in the frame of the IAOT (on Energy Efficiency, on Legal Issues and on Supplies) as well as the Schedule of the IAOT for the next two years.

At the conclusion of the meeting was signed by the CEOs of both companies, the Agreement on cooperation between the JSC "Gomeltransneft  Druzhba" and the JSC "Ukrtransnafta".